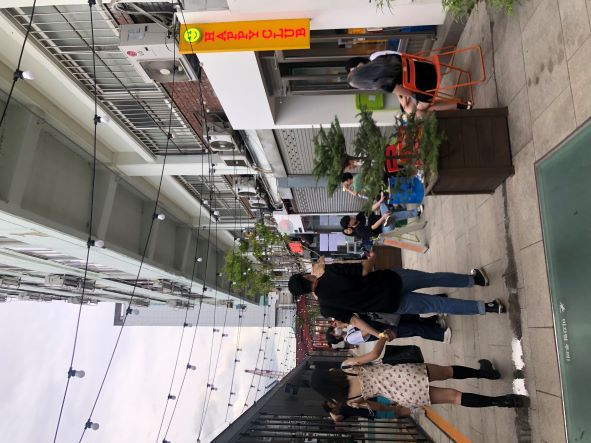 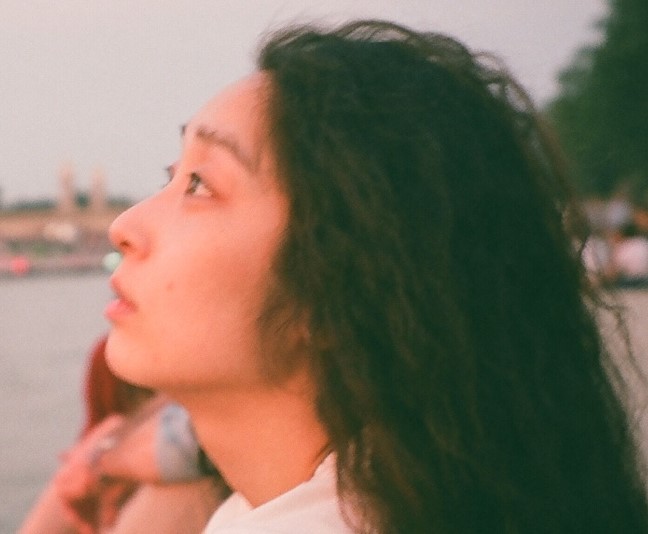 Sewoon Sangga and Eulji-ro, like a new world just discovered to the young and hip

The well-renovated Sewoon Sangga became visible soon after I started walking. It managed to survive potential demolishment as it had become a slum since in the early 2000s. The Sewoon Sangga area was originally a ghetto after the Korean war until the building was built in the 1970s. Back then, buildings were built quickly without intention to preserve them in the long-run. It was common to build it quickly and demolish and redevelop the area quickly back in the day.

Nowadays, there is more effort to preserve old buildings by restoring and renovating them partially and gradually. Sewoon Sangga is a great example of preservation endeavors. Workshops in the area where engineers with 30–40 years of experience gather together are connected so well to workshops and markets in other neighborhoods as to reach them easily on foot, such as the print district in Inhyeon-dong, Bangsan Market specialized in wrapping materials, and Dongdaemun Market. So, the engineers can easily do everything they need within the area from R&D to manufacturing, repair, packaging and distribution. Such experienced engineers and the geographically concentrated supply chain contributed to the fame that these workshops earned for their excellence in manufacturing consumer goods.

A series of stores are lined up in the outdoor spaces of Sewoon Sangga. Such wide-open outdoor spaces are unusual in new buildings built more recently. I wanted to relax with a cup of coffee mixed with a fresh autumn breeze while looking around the people there and at the beautiful fall sky above but couldn’t find a coffee shop with an empty table.

Many stores in the outdoor spaces are famous from when Sewoon Sangga was considered one of the most luxurious buildings in Seoul almost 40–50 years ago. Surprisingly, these stores are packed with young people. I suddenly wondered, “when was the last time I visited somewhere with so many young people?”

Some of these young folks must be artists and engineers who have their own studios in the building; or those interested in architecture who came to appreciate this old building itself. But most of them in the outdoor spaces were obviously locals who came to spend their weekend in the area or visit hip cafes or restaurants.

There is a long walk deck that connects Sewoon Sangga to Eulji-ro. You can look at the city of Seoul from various perspectives without being disturbed by crowds while walking on the deck. The walk deck has wide open spaces and offers many good spots to sit and rest.

I got coffee from a coffee shop and sat down on a long and wide staircase covered by some nice shade.

It was several years ago when I first came to Sewoon Sangga. Back then, it looked completely different to how it does today. The building had a lot of vacant spaces for rent. One of my friends, who is a musician, rented an empty store at a really cheap price for one day for her concert. She used the empty space as a stage for her concert by decorating it with flowers and setting up basic lights. The audience, including myself, watched her sing with an acoustic guitar right outside the store.

I still remember that the spaces next to it were empty. The outdoor spaces felt like a construction site and were very quiet. The songs she was singing were peaceful and the weather was cool. I passed through Eulji-ro on my way home that night. It was really like an abandoned city. The narrow alleys even looked sketchy.

Eulji-ro is now flooded with young folks. The narrow alleys might not seem that different from several years ago but the atmosphere there has completely changed thanks to the young people who stroll through the alleys. I now feel perfectly safe walking through the area at night by myself.

If you hear noise or see young folks go into that old building—that means there’s a trendy place somewhere in that building. There’s no way to figure that out based on its look. Maybe all of those businesses at Eulji-ro are very good at hiding their stores from public attention. Or maybe they focus on online presence, like on social media.

Walking on a street with a series of workshops lined up, I saw hip young folks coming out of an old building continuously, one by one. I walked over there and found a very small entrance which I would never try had I not seen the people coming out of it. There’s no sign, but a small painting on the door. It seemed like there was an art gallery on the second floor of this building.

Similar situations happened all the time as I explored Eulji-ro that day. Whenever I run into places that looked interesting, I had to pull out my phone and do some research online to figure out what these places are. Some of them were restaurants, bars, coffee shops or art galleries.

It was a weekend, so the workshops owned by the skilled engineers were all closed. But the restaurants and bars were all open. If it were a few years ago, these stores would have closed as well following the engineers’ schedules. But they are open now to serve young people who come to Eulji-ro anytime throughout the week.

You can easily find simple tables set up on long and winding streets in Eulji-ro. Nopos and traditional Korean restaurants became too popular these days to find available tables without waiting.

I also came to Eulji-ro with the same purpose as these young people. It was the kind of day when I felt like drinking soju (Korean whiskey) with samgyeopsal (pork belly BBQ), rather than natural wine. Maybe everybody in the Eulji-ro area had the same appetite that day. I couldn’t find a single empty outdoor table. Well, I know some luck is always necessary when you have a very specific food in your mind.

So, I ended up having soju with mixed seafood boil at a casual seafood restaurant. On a different day, I went to a lovely wine bar named “PER” on the second floor of an old building in Eulji-ro. This wine bar was started by the owner of a place I like called “EP bar” in Yeonnam-dong.

EP bar in Yeonnam-dong is more casual and is where many locals gather, whereas PER in Eulji-ro is a little bit fancier and people seem to more thoughtfully pick their clothes. I like EP bar more but would probably go to PER for a birthday party or blind date. I feel like the stars are flowing like a stream at EP bar while they are brightly shining at PER.

On the first day of the weekend when I visited Sewoon Sangga, I saw a construction site on my way to Euljiro via the walk deck. The site looks different from other construction sites. The workers at the site looked like artists. I found out later that the construction was for live projects at Seoul Biennale of Architecture and Urbanism.

New projects are always going on at Sewoon Sangga. The young and old, developers and architects and artists put their heads together to come up with ways to not only preserve the building, but also restore and revitalize it. Thanks to the projects and these passionate people, Sewoon Sangga offers a unique experience you cannot find at other nicer buildings.

Inside Sewoon Sangga, there are galleries and listening rooms where you can freely listen to old vinyl records. So long as you aren’t disturbing them, you can watch the artists and engineers work. The rooftop, which was once bizarrely battered, has been fully renovated. More restrooms were installed too.

As the new and old keep getting mixed, Sewoon Sangga never stops changing itself. So, if you plan to spend a day or two around the area, I strongly recommend that you check the live projects going on at their website here: http://sewoon.org.

Channel 1969 is a home for indie music lovers, both fans and musicians, in Korea. Come by and enjoy the music!
Read more
March 10, 2022

Top filming locations for the TV show Our Beloved Summer picked by one of our contributors.
Read more
February 9, 2022

Let's look around SEMARQ, a beautiful hotel in Gangneung, South Korea, together. You'll fall in love with it!
Read more